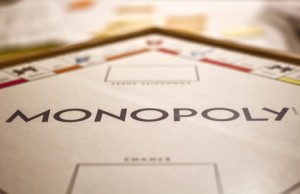 Playing board games triggers the release of endorphins, the body’s “happy hormones.” So does doing something that makes a positive impact on your community. We’re spreading the word about Habitat for Humanity’s Monopoly Tournament event because it allows participants to do both at the same time.

About Habitat for Humanity of Smith County

Habitat for Humanity is an international organization that builds and provides safe, affordable housing for low income individuals and families. Their mission statement says they’re “seeking to put God’s love into action, bringing people together to build homes, communities and hope.”

The local Smith County affiliate envisions a Smith County where everyone has a decent place to live, including low income working individuals who might have trouble affording a home otherwise. New home owners work alongside Smith County volunteers to build their home. Then, after construction, Habitat sells the completed construction to its new owner at cost and provides zero interest financing.

Kaitlyn Shultz, Habitat for Humanity of Smith County’s Director of Development and Marketing says a lot of people have misconceptions about the home ownership program. “People think that we give away homes from donations we receive, but that’s not true.

“Our Habitat families work very hard to purchase their Habitat homes. We also require financial management and home ownership courses as part of the program they go through. We try to set them up for success, not just throw them in a situation they’ve never been through before.”

She says the results are life-changing. “It’s a huge dream come true, something they didn’t think was ever going to happen for them. Most of our homes do belong to families. Sometimes they also go to single moms who want a safe, dependable place for their child to grow, live and play.

“I keep thinking of an interview with a homeowner who kept saying she couldn’t believe her child was going to have a yard, a safe place. That’s something people take for granted – having a safe space for you and your family to be in.”

Habitat for Humanity does more than just build homes. Their Critical Repairs program is geared specifically toward seniors, veterans and people with disabilities.

“Sometimes,” Kaitlyn explained, “An elderly couple may have paid off their home, but because they’re on a fixed income they can’t afford to fix a leak in the roof or hole in the floor, or replace a front door that rotted off its hinges.”

She told of individuals who had to cover a hole in the floor at night so animals didn’t get in or sleep in another room when it rained because their bedroom ceiling leaked. “They don’t always know how to find the people to complete the work. They’re overwhelmed by the process, and it’s a huge weight lifted when things are fixed.”

Many East Texas residents know Habitat’s ReStore is both a great place to find home improvement product bargains and to drop off extra construction materials at the end of a project or during a remodel. ReStore rescues building materials that might otherwise end up in a landfill and sells them to the general public, and uses funds toward Habitat for Humanity projects.

On April 2, 2022, Habitat for Humanity invites players nine and older to participate in a Monopoly tournament to compete for trophies and cash prizes. Multiple elimination rounds will take place throughout the day, with the final round featuring the top four players.

Last year’s event was a hit, and the 2022 tournament is expected to be even better, with participants coming from as far away as California. Internationally known Monopoly player Ken Koury also plans to attend.

At Brelsford Personnel, we’re thankful for the impact Habitat for Humanity has on our community. Please share this article to spread the word about their upcoming event.

Prev:  5 Work Habits That Are Holding You Back
Next: Try These 5 Minute Stress Busters You Can Do At Your Desk